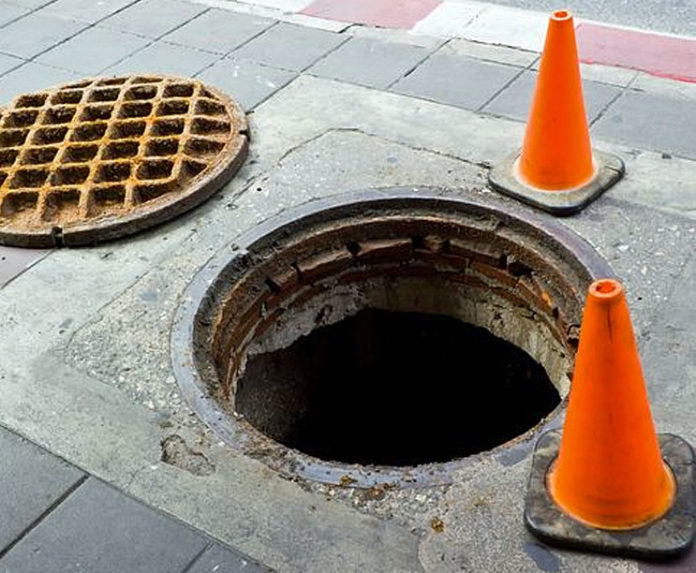 When dignitaries or high-profile individuals visit cities, municipal crews often weld manholes shut in vulnerable locations to ensure safety, costing tens or even hundreds of thousands of dollars each time they must be welded and then cut open again.

Manhole covers and similar access points related to sensitive areas as well as critical infrastructure locations have proven to be a source of significant vulnerability, and many malicious acts such as vandalism, material theft, and even terrorism have occurred due to ease of access through manholes that generally are unprotected.

Utility companies, telecom providers, and municipalities are increasingly installing cabling and other components of their physical infrastructures underground.

Power is carried over metal cables, but most data and telecommunications infrastructures utilize fiber optics, and these vital links commonly pass through underground vaults.

The data and telecom traffic carried on these lines is sensitive at a minimum, and the access points to such lines need to be secured to help maintain both the integrity of this vital infrastructure and the security of the information carried by it.

Although the jacket of a fiber optic cable may appear virtually identical to a cable containing copper wires, a thief in a hurry may not distinguish between the two; and as the following account illustrates, metal theft may not be the only motivation for lifting a utility vault cover.

At the lower end of the threat continuum, thieves frequently enter manholes to cut power cables in order to steal metals to be sold for scrap.

For these efforts, they may gain a few hundred dollars from a scrap yard, while causing thousands of dollars’ worth of damage and the loss of critical public safety services, power, and telecommunications to nearby industry, the surrounding community and its citizens.

At the higher end of the threat continuum, literally hundreds of thousands (if not millions) of manholes around our nation give easy access for a physical attack against vital components of our infrastructure, and the Metcalf attack demonstrates this easy access.

In addition to access points for vital components of our national infrastructure, manholes in and around city centers, stadiums, coliseums, hospitals, campuses, government agencies or similar public venues where large numbers of people gather at one time may also be points of vulnerability.

A safe and durable means of continuously monitoring the position of manhole or vault covers, in order to detect when they are opened and closed, is needed to help protect our vital communications and power infrastructures installed in manholes and underground vaults.

Monitoring of manholes near public venues where many people gather also would be beneficial to immediately alert authorities of any unauthorized entry; such monitoring would help maintain perimeter security and improve public safety.

The Vulnerability, an Example – The Metcalf Attack

On 16 April 2013, just before 1AM, intruders lifted the heavy cover of a telecom underground utility vault near the Metcalf power substation just south of San Jose, CA.

They cut fiber optic telecom cables in the vault, disrupting communications in the area; a few minutes later, they entered a second vault nearby and severed more telecom cables.

Then, starting around 1:30, they focused rifle fire on high voltage transformers inside the substation fence. The shooting lasted nearly twenty minutes, and then the saboteurs vanished into the night.

Law enforcement officers arrived only a moment later, saw nothing suspicious, could not get past the locked fence, and left.

The attack caused leakage of 52,000 gallons of cooling oil and disabled 17 transformers; a blackout in portions of Silicon Valley was narrowly averted through power re-routing and conservation.

Jon Wellinghoff, then chairman of the Federal Energy Regulatory Commission, visited the site afterward and brought along military experts.

They concluded that it was a planned professional job, and Mr. Wellinghoff stated the attack was “the most significant incident of domestic terrorism involving the grid that has ever occurred” in the US.

The Department of Homeland Security defines terrorism as any activity involving an act that is “dangerous to human life or potentially disruptive of critical infrastructure or key resources.”

By this definition, the Metcalf attack was a double act of terrorism.

Such classification may or may not deter would-be thieves or saboteurs depending on their determination, knowledge and speed, but the development of systems to continuously monitor access points and help protect the security of vital infrastructures located underground has not kept pace with the expansion of such infrastructures themselves.

If a well-coordinated attack on these systems were to occur again today, how quickly would we know the location?

What if we could identify, in less than five seconds after it occurred, exactly which manhole cover was disturbed?

Given this capability, might the Metcalf event have turned out differently?

Desirable attributes of a suitable manhole/vault cover intrusion detection system include the following:

LCM-6100 systems are part of the FiberStrike suite of fiber optic sensing systems made by Cleveland Electric Laboratories (CEL) in Tempe, AZ, which have been deployed both domestically and internationally.An effective solution exists in LCM-6100 manhole cover position sensing systems, which are specifically designed to help protect the security of underground utility infrastructures by monitoring the position of covers at the manhole or vault access points.

FiberStrike sensing systems use light (not electricity) to sense position or movement, and system attributes address all of the criteria listed above.

An LCM-6100 system for monitoring manhole or vault covers consists of LCM-610 sensors, LCM-2600 monitoring equipment at a remote location, optical fiber that links the sensors with the monitoring equipment, processing software, and a graphic user interface that is intuitive and easily used without requiring extensive training.

“The ROI for a FiberStrike system may be estimated by comparing how many times a city has to go through the aforementioned process of welding manholes closed and reopening them (at top), or estimates of how much will be lost in the event of thefts, vandalism or terrorism, against the system installation cost,” said Rodger Shepherd, VP Advanced Technologies, CEL.

“Type SMF-28 fiber is commonly used in telecom systems, and if dark (unused) fiber of this type already passes through manhole/vault spaces to be protected and testing confirms it is suitable, installation costs may be reduced by using such fiber to link cover position sensors and the LCM-2600 remote monitoring equipment.”

“Up to fifty LCM-610 sensors may be multiplexed on one fiber, making efficient use of available fiber and further reducing installation costs.”

“The FiberStrike system continuously monitors the position of manhole or vault covers and immediately reports a change at any cover; the LCM-2600 equipment can simultaneously monitor hundreds of cover sensors if desired, with every cover individually and uniquely identified.”

“Alerts also can be transmitted to multiple authorized recipients via voicemail or text.”

“Individual identification allows exact location of any attempt to access a manhole or underground vault through a cover on which a sensor has been installed, and facilitates an immediate focused response by security or law enforcement personnel if appropriate,” concluded Shepherd.

As an ‘ASTORS’ competitor, Cleveland Electric Laboratories (CEL) will be competing against the industries leading providers of innovative sensor, intrusion detection systems for critical infrastructure.

For more information on LCM-6100 systems, as well as other FiberStrike intrusion sensing systems, readers are encouraged to contact Cleveland Electric Laboratories’ Advanced Technologies Group (CEL-ATG) by phone at 480-967-2501 or via email at sales@cel-atg.com.